First, an apology for no blogs last week.  Centauri Spaceworks has been diversifying into Tiny Space Program .  A significant portion of resources has also been devoted to developing an asteroid mining game.   And everyone in the Space Agency division decided to take their vacation last week.

Here is preliminary design of Trade Station Omega.  It isn't complete but it is close. The design doesn't have the locations of the oxygen gardens, med bays, and control rooms placed.  It also doesn't have the power calculations, but with 4 nuclear generators and 12 large solar panels it should be enough to power it. 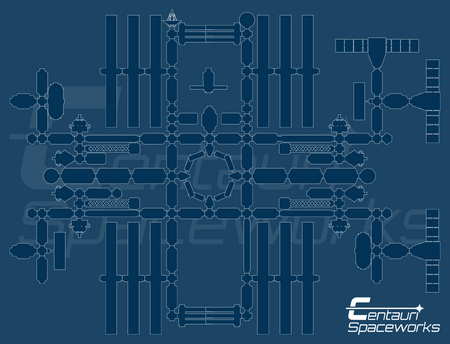 What suggestions do you have for it?  Tweet @CentauriSpace.  Maybe your suggestions will make it into the final design.

Retrieved from "https://spaceagency.fandom.com/wiki/User_blog:Angrycat9000/Trade_Station_Omega?oldid=51408"
Community content is available under CC-BY-SA unless otherwise noted.