This build is based on the Raza from the sci-fi series Dark Matter.

Notable features include the 4 engine pods, created with ADS cores and Voyager X bodies.  The front two engines are for show and fuel storage as they create a rotational instability in the ship when used.  However, the two rear engines are close enough to the center line that they can be used without causing the ship to rotate when fired. The ATV at the center is well positioned for maneuvering and braking.  The pod can also be used to provide forward thrust if needed.

The pod can also double as the ship's shuttle, the Marauder.  On the show, the ship's infirmary was a re-occurring set.  The Space Agency version includes a medical bay as well. 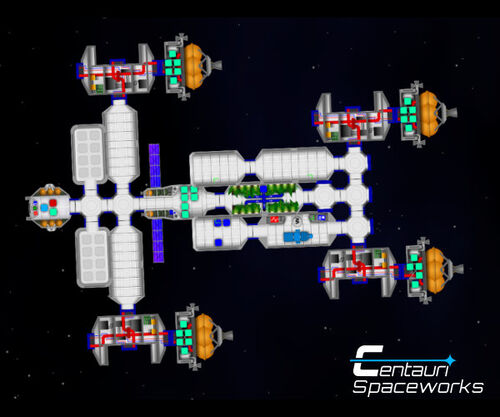 Thanks to TheTruthisWrittenInBlood for uploading the image of the original Raza .

Retrieved from "https://spaceagency.fandom.com/wiki/User_blog:Angrycat9000/The_Raza_(Dark_Matter)?oldid=48537"
Community content is available under CC-BY-SA unless otherwise noted.