Last week Centauri Spaceworks debuted the Hornet, a small agile racing craft.   This week, Centauri is excited to  the introduce another vehicle that will make an appearance at a solar system wide race.  However it won't be at the starting line, but on the side lines.  The Peacock is a support vehicle for up to four Hornet class racing ships. 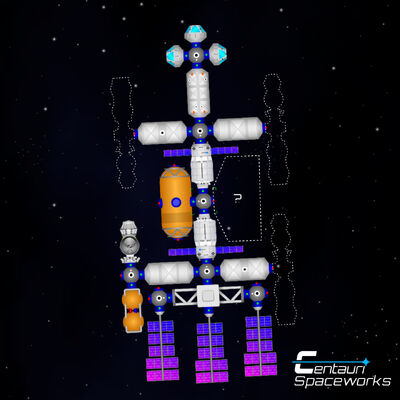 The Peacock is named for the three auxiliary solar panels that are mounted on the rear of the vessel.  At the right angle these solar panels have an iridescent glimmer like the feather's of of a peacock.

There is an attachment point on the right hand side of the vehicle that allows for customization.  Clients can choose to put a transponder module to make it easy for the racing vehicles to find the support ship.  A Voyager X engine is can be fitted in case the Peacock is a quick service pit stop.  This would allow it to store full tanks of O2 and CO2 scrubbers to immediately swap instead of waiting for ones to recharge in the oxygen garden.  A third option  is to outfit the Peacock with an additional fuel silo for extra fuel capacity.

Retrieved from "https://spaceagency.fandom.com/wiki/User_blog:Angrycat9000/The_Peacock?oldid=46515"
Community content is available under CC-BY-SA unless otherwise noted.