In Mission 30 the player recovers the shuttle, and docks it at STA.  The shuttle can't re-enter HOM because of damaged heat shields.  This post discuss an idea for how that could be fixed and we can bring the shuttle home as well as add a new feature.

The shuttle would come in two parts: the boosters plus fuel tank, and the orbiter itself.

Splitting up the shuttle from the boosters and fuel tank would also allow for an Energia style vehicle to be constructed.  The Energia could reuse the same booster and fuel tank part, but would have a separate one time use rocket that could carry a medium payload instead of the shuttle.

After the shuttle is placed on the external tank and booster combination, the player can load up the shuttle with supplies.  A small sized payload can also be placed in the open cargo bay.

The orbiter would be launched in a side profile view, with the fuel tank and boosters on the right and the orbiter on the left.  This keeps the view consistent across all of the modes of operation.The launch tower would be displayed behind the vehicle instead of the the left.

The orbiter would follow the same pattern as other rockets of pitching over to the right during launch.  This places the orbiter on top of the external fuel tank, which is different from real life launches.  This difference is important because it sets up the orbiter in the correct orientation for re-entry with the heat shield facing down. 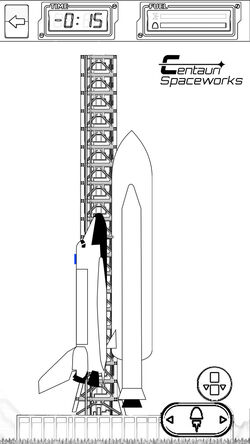 The shuttle movement would operate similar to other vehicles.  There is one additional button to support a unique feature of the orbiter. 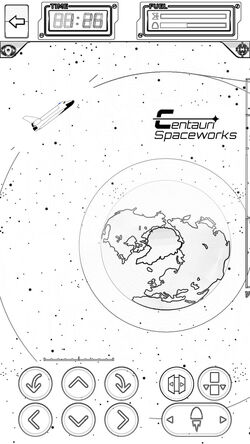 The button controls the cargo bay doors.  The cargo bay can be opened using a special button in the interface.  Once the cargo bay is open, if the cargo inside free floating.   The shuttle can be maneuvered away from the object to have it exit the cargo bay.

This cargo bay system is simple and can work with any cargo that will fit, including those that don't have a docking port.

Once the shuttle reaches a low enough altitude the landing gear can be deployed (instead of a parachute).  Then a cut scene would take over and show the shuttle landing on a runway.  A successful landing of the shuttle in sandbox mode awards the player one quick launch. 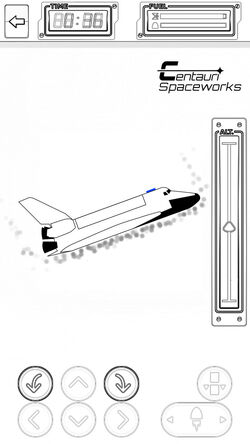 Mission 30 could be modified to use the new shuttle design with little impact.  Both designs have a docking port on one side of the vehicle.

Big thanks to  Chris @ York Space Agency for letting me bounce some of these ideas off of him.

Retrieved from "https://spaceagency.fandom.com/wiki/User_blog:Angrycat9000/Shuttle_Re-imagined?oldid=49521"
Community content is available under CC-BY-SA unless otherwise noted.