You can almost recreate the moon landings in Space Agency.  Almost, because the closest thing to a man that a player can send to the moon is a tank of water.  Space Agency doesn't have astronauts.  Andy Barry, the developer of Space Agency has said that he is working towards adding astronauts.  This blog post will show a vision of what astronauts could look like.

If you visit the Space Agency Wiki, it is not a surprise that many of the players use the game to role play.  They create their own agencies and plan out missions.  Astronauts could really enhance the role playing use of the game.  In addition to building up a space-scape of stations and a fleet of vehicles; agencies could also build up a corps of astronauts!  Boring resupply mission: send the newbie astronaut to get some experience.  Harrowing shuttle rescue mission: send your top commander to make sure the job gets done.  This adds a new human dimension to the game. 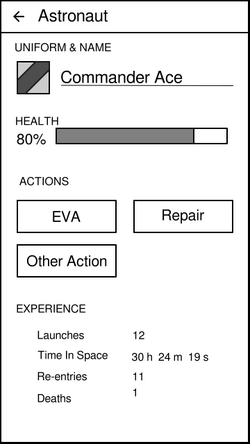 In the space view, astronauts would work similar, but not identical, to cargo.  A new tab is added to the far left of the view menu.  This brings up the astronaut bottom panel. 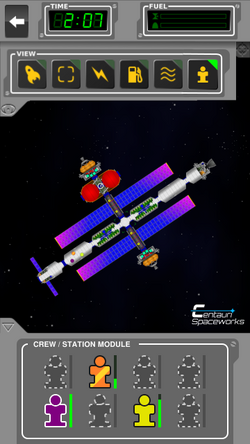 Moving astronauts works similar to moving cargo.  The player drags them from the panel to the destination module.  One difference would be that the starting and destination module must be connected by an path of open doors.  Astronauts can't travel through closed doors or non-atmospheric modules.

To give a better indication of where valid move locations are, the accessible modules should be highlighted in a light green while an astronaut icon is being dragged.  The module where the astronaut will be moved to should be highlighted in a dark green.  This will help aid in moving the astronauts to smaller modules like the crew capsule and identifying closed doors that block movement.   This concept of highlighting the drop module could also be applied to cargo moves.

Another difference between cargo and astronauts is that tapping on an astronaut's icon would take you into the details for that astronaut.  That lets you access the details and possibly perform actions with the astronaut.

That covers some of how astronauts could work.  Hopefully this inspires you and Andy Barry to dream big about astronauts.  I hope to see them in the game soon soon in whatever form they take.

Centauri Spaceworks would like to thank other agencies for contributing their ideas and giving feedback:  Rimor Locus, United Space Alliance, and York Space Agency

Retrieved from "https://spaceagency.fandom.com/wiki/User_blog:Angrycat9000/Astronaut_Dreams?oldid=45823"
Community content is available under CC-BY-SA unless otherwise noted.