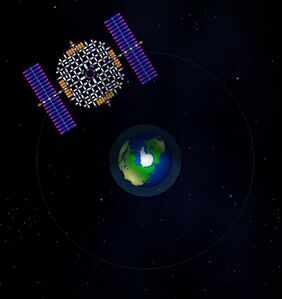 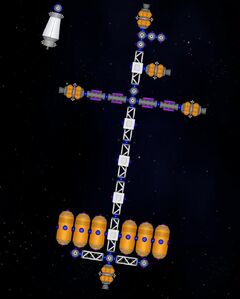 New Pari station in assembly, a total of 145 modules to be assembled, currently assembled 30 modules of the main spine.
Add a photo to this gallery

Besides that, a newly announced AX Sky Lab (9 modules) has been canceled right after the proposal of a larger station, AX Space Base (73 modules). The sky lab was canceled due to the overlapping programs with space base especially the lab for the AX Interplanetary Lab department (AXIL). The AX Space Base assembly can start alongside Pari construction anytime soon.

Retrieved from "https://spaceagency.fandom.com/wiki/User_blog:Angkasa-X/AX_Times:_Gerhana_Complete,_Pari_Construction_Has_Begun?oldid=28759"
Community content is available under CC-BY-SA unless otherwise noted.