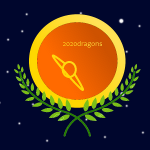 Here's some of my stations, spacecraft, and station blueprints by me.

A large space vessel designed for interplanetary exploration, it's probably my largest space station, completed on July 2019. The main "engines" used to propel the aircraft to different locations are the Eagle 8 First Stage used to propel forward, a Proton Second Stage used to slow down the forward speed or to propel it backwards, and two Station Builder Tugs to propel the aircraft to different directions.

This was the first station that I successfully finished building. The intial final product had a total of 71 modules, and it could generate lots of power, due to the noticeable large numbers of the solar panels, and also the two CSgt Nuclear Generators on the top of the station. It was built on March 2018.

On April 2018, I decided to upgrade the station, but pretty much no one cared about that upgrade. I also split the station into four zones, shown on the image on the left (if you'e using a computer like me).

I plan to rebuild this station in my "super stations" sandbox.

A space station located on a region between HOM and PUR, it serves as a large recharging space station that can recharge spacecraft almost instantly.

On my "super stations" sandbox, I have upgraded the three main stations of the game: STA, MSS and ADS.

STA was the first space station I have upgraded. It is now more powerful than before, thanks to its six new large solar panels and two new CSgt Nuclear Generators. It kind of resembles the space station seen on the fifth mission on the Quick Play mode and on the briefing of the Sandbox mode. It has 36 modules now.

Then, I upgraded the MSS, now with 34 modules. The three Soyuz spacecraft serve as escape pods, and an oxygen garden and airlock were installed to improve the atmosphere on the station.

The ADS was the last station I have upgraded. Now, the station has much better qualities for the crew, as the "crewable" modules and "uncrewable" modules had been separated. It sort of resembles the QPS, but with its upper section (the one above the solar panels) cut off. Like the upgraded STA, it has 36 modules.

The name of this station is classified, as it is a reconnaissance space station. It's always aimed for HOM, that to confuse people observing it from a telescope as a large satellite. Its previous NaviComp designation was SPY.

The Gemini Explorer is a recently built spacecraft intended for cheap interplanetary manned exploration with a Gemini Capsule and without docking. The problem with this spacecraft is that, as it is powered by a Stand-Alone Laboratory, its main fuel tank exhausts rather quickly, that's why the thrusters are more used for voyages.

The Mega STA was my first attempt to build a space station. It was supposed to be a STA upgrade with a bunch of new modules, mostly ATVs. When the station's power suddenly ceased, I destroyed it with an Explosive Module. It had two waypoints: MEG and STA.

The Voyager-Z was an attempt to construct an exploration station. I don't remember much details about it. Its waypoint can be seen on this image.

I plan to construct a space station with the same name in my "super stations" sandbox.

After seeing a Challenge of the Week by Galleigo, which had its main objective to build a carpark in space, I suddenly felt the urge to build one (GRG, Garage), however the station was abandoned during construction.

The Space Hospital would have been an hospital in space containing nine medical bays and with a Shuttle that would transport the patients to it. Because of my silliness (not saving while building a station), the hospital vanished during construction, and I decided not to rebuild it again.

This was a rather complex exploration station that I had been working on in a sandbox in April 2019. I've successfully built a part of the station, but abandoned it mid-progress. Later on I would go on to build the ESV.

This was the largest space station I have ever attempted to build. It had 478 modules, and had a cross/X-like shape. Soon after finishing the ESV, I started building the core but left it behind as a concept blueprint.

Station Crossroads is currently planned to be built soon. It will serve as a recharging and refueling station.

The name of this station is classified, because, like the PRS, is a reconnaissance space station. However, unlike the latter, it wasn't built yet, and building is gonna start some time after the completion of the SCR.

A planned exploration station that would be powered mainly by Ion Drive Linkables, and an Automated Transfer Vehicle will be used to slow it down or to turn the vessel to other directions. It also has a survey pod on its top that would separate from the main spaceship and orbit the planet for better details of it.

A blueprint introduced on April 2019, it was shaped like a rectangle (intended to be shaped like the hull of a ship), and would be powered almost entirely by Ion Drive Linkables.

Another design on 2019 was about an untitled exploration station that appeared in late June 2019.

A more recent concept introduced on July 2020 is about a multipurpose space station that would generate tons, and I mean TONS of power. It has a total of 887 modules.

Retrieved from "https://spaceagency.fandom.com/wiki/User:2020dragons?oldid=66116"
Community content is available under CC-BY-SA unless otherwise noted.