Welcome to the Space Agency Wiki!

This is an unofficial wiki for Space Agency, a game for iOS and Android developed by Nooleus.

In Space Agency, you are in control of your very own space program. Start out with satellite and space telescope launches, expand your space station, fly to and land on the moon or even other planets. The possibilities are infinite!

What is Space Agency?

Space Agency is all about designing your rockets and launching them into space. Once you have come up with a good design, launch your rocket and get it into orbit. Now the real fun starts - either stay near the planet and leave a satellite in orbit, or travel out into space. You can expand the initially very small space station, fly to and land on the moon with the Saturn V, or send out probes to explore other planets or the Sun. With the new scientific discoveries made while you progress, you will later be able to set up an asteroid detection system to protect your home planet, or even land on the Red planet!

Here are some tips for getting started on the wiki:

Topics that should be on Pages:

For more information on Getting Started, see the Beginner's Guide.

To quote his tweet: "The new game is called Space Agency 2138. It is set in the not too distant future. The aim of the game is to colonise and mine the planets in the solar system and use their resources to build space stations, etc."

What's shown in the video hints at players exploring the solar system in full 3D action, and they now get to go inside their spacecraft and actually work the various (and numerous) new controls, which are located in different places inside the ships and station modules.

Astronauts have been added; and players get to play multiple roles, such as pilot and engineer, each with different responsibilities and job functions.

This is a poll concerning Andy's sneak peek video of a new game in the Space Agency family, Space Agency 2138.

If you see this, your JavaScript might be disabled or DiscordIntegrator plugin isn't working. If the latter, please contact a wiki administrator. 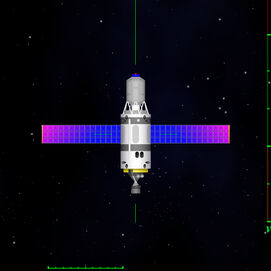 The Stand-Alone Laboratory is a totally self-sufficient micro-space station that is capable of generating its own Power.

Read more about it here.

Retrieved from "https://spaceagency.fandom.com/wiki/Space_Agency_Wiki?oldid=62184"
Community content is available under CC-BY-SA unless otherwise noted.