Quick Launch is a feature available in the Sandbox which allows a player to add station modules instantly into space. Please note that rocket parts and spacecraft (except the Stand-Alone Laboratory) are not available on the Quick Launch list.

Alternatively, for every 10 regular launches that are successfully completed, the player receives 1 free Quick Launch to be used when desired. Additionally, successfully launching and landing the LP1 or Eagle 8 First Stage will also credit the player with 1 quick launch. 10 LP1 or Eagle 8 First Stage launches will receive a whopping 11 free Quick Launches.

This feature was added to Space Agency on April 27th, 2017. As new station parts are added to the game, some are customarily added to the Quick Launch list. 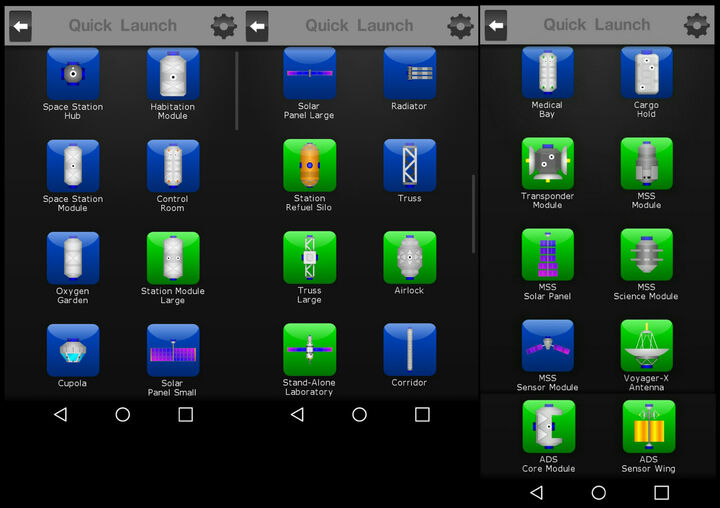 Below is a list of parts available for Quick Launch:

After you have selected which new station part you wish to add via Quick Launch, you will be prompted to select where you want the station part placed. The list of existing objects in your sandbox will be appear. Simply select which area you want the new part to be placed.

NOTE: Quick Launch automatically places the new station part to the left of the area selected, customarily about 1 unit away.

If there are other objects already in that general area, Quick Launch defaults to placing the new object further away to the left. In rare circumstances, Quick Launch may place a new part a considerable distance to the left (perhaps 10 or 20 units) to ensure it is safely placed into space.

WARNING: If the chosen target object is moving, then Quick Launch will match the new station part's velocity and direction of travel to that of the existing object. This may result in a collision with other nearby objects already in that immediate area in space.

You cannot quick launch to a landed lander, as said landed lander will not appear in the place selection menu

Retrieved from "https://spaceagency.fandom.com/wiki/Quick_Launch?oldid=66599"
Community content is available under CC-BY-SA unless otherwise noted.