The Orion Crew Capsule is a segment of the Orion spacecraft. It has full maneuvering capability in all directions, and plenty of thruster fuel, which allows it to easily dock even without the service module attached.

Atmospheric entry is relatively easy with this capsule, due to its plentiful fuel supply. It also has space for 5 Cargo. By default, it comes with an Oxygen Tank, Battery, and Carbon Dioxide Scrubber, leaving 2 Cargo spaces empty. This capsule can also be attached to any Medium Stage, or Large Stage with an adapter to medium. 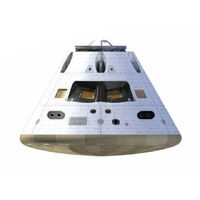 The "real" Orion Crew Capsule, being produced by Lockheed Martin for NASA, for use with the forthcoming SLS rocket. 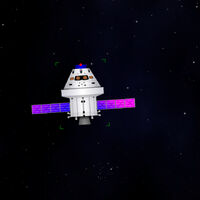 The Orion capsule with the attached Orion Service Module in space.
Retrieved from "https://spaceagency.fandom.com/wiki/Orion_Crew_Capsule?oldid=67261"
Community content is available under CC-BY-SA unless otherwise noted.