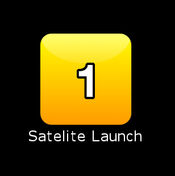 In Mission 1, named Satelite Launch, you launch your first item into orbit, a satellite. Your tasks are to launch it into orbit, face it towards HOM and release the payload.

The mission can be best achieved by using a Mercury 1st Stage, Connector Small to Small, Tug Module, Communications Satellite, and Fairing Standard, launch it, and then use thrusters on the tug module to turn so you are facing the planet, use engines to move forward so you are out of the entry level (to make future missions easier) and tap the release button, you should then be rewarded with a gold award, if not try again, do it faster, and don't use checkpoints.

This is your first real mission!

The agency has been contracted to launch a new Communications Satellite into space.

You will find the satellite in the Payloads section. Place it on top of a rocket, and cover it with a fairing.

Launch the rocket into space, just as you did in Tutorial 1.

Once in orbit, separate the fairing.

Good luck - we're counting on you!

Tip. Play Tutorial 1 to learn how to build and launch a rocket.

Retrieved from "https://spaceagency.fandom.com/wiki/Mission_1?oldid=66125"
Community content is available under CC-BY-SA unless otherwise noted.