An Automated Transfer Vehicle, also known as ATV, is a payload which has 8 Cargo spaces (compared with Apollo's 3, Orion's 5, Draco's 5 and the Resupply Module Dockable's 6). Since it has integrated solar panels, none of these cargo slots need to be occupied by a battery.

While real-life ATVs can dock with the space station automatically, the ATV in Space Agency must be piloted manually. It is also pressurized; that is, contained Oxygen Tanks and Carbon Dioxide Scrubbers will be depleted over time.

The ATV is unique among spacecraft (not station modules) in that it has docking ports at both ends. This allows a long string of them to be docked together while each of them still retaining the main engine's functionality. This also allows for placing the ATV in the middle of a large Station which makes it able to retain of sideways motion without any yaw change.

It is perfect for space exploration, and the main engine's restart has no latency (The yellow gas explosion flame) unlike other vehicles like Station Builder Tug, Resupply Module Dockable or Apollo Service Module, allowing for precise and accurate movements. Only the Voyager-X Main Body, Tug Module, Tug Module Heavy, the Pod, Gemini service module and LOK service module share this ability (The blue flame) with the ATV.

Another unique feature of ATV is that it continues to generate and supply electricity even if it is turned off. It produces 30 units of Power without batteries. 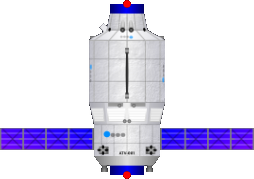 Retrieved from "https://spaceagency.fandom.com/wiki/Automated_Transfer_Vehicle?oldid=66594"
Community content is available under CC-BY-SA unless otherwise noted.